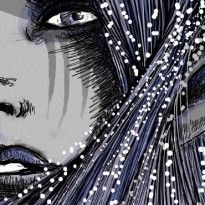 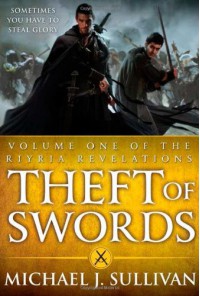 I must have had these individual books on my Kindle for a while, picked up back when they were still independently published, but didn't begin reading this series until last weekend when my family and I went on a road trip and decided to listen an audiobook in the car to while away the hours. Now that they've been republished in collections by Orbit, Audible had these books available as well.

Well, I'm really glad I chose this one. Both stories (The Crown Conspiracy and Avempartha) were so riveting that the time just flew by. Before we knew it, 8 hours had already passed and we were at our destination. I wish I had started reading these books earlier. It's a bit surprising to me now that these weren't picked up by a major publisher until much later, as I have to say the quality is so much better than a lot of other fantasy out there, even some of the stuff by established and well-known authors.

While these books fall pretty neatly under the category of traditional fantasy and though I wouldn't say there's anything in particular to rave about, I must say I've enjoyed everything I've read so far. The language and casual flow of the writing makes this an easy read, and on the whole the mood is light-hearted with a pair of protagonists that are witty and very likeable. The setting is again very traditional as far as the fantasy genre goes, but I'm impressed by the world's rich history and traditions.

The Riyria are thieves for hire, and their talents are so legendary that even the lords and nobility use them for jobs. The Crown Conspiracy introduces the master swordsman Hadrian and the light-footed and quick-fingered thief Royce, who find themselves framed for the death of a king. In Avempartha, our heroes are hired to break into an inaccessible tower to steal a sword, the only weapon capable of slaying a magical beast that has been terrorizing the nearby countryside.

They're both your straightforward adventure "quest" stories, complete with dwarves, elves and a wizened wizard that most fantasy readers will recognize, but there was enough mystery and intrigue to keep things fresh and me guessing. Also, I just can't stress enough how much I love these characters. A king, a princess, a wizard, a monk, a farm girl, a couple thieves...it would easy to dismiss all of these as hackneyed archetypes, but that would be a mistake because they will surprise you at every turn.
Tweet
708 BOOKS